What’s in a name? Martin Palmer says why he prefers “Henstridge”.

Posted on April 25, 2016 by kelstonroundhill

The environmentalist and religious historian Martin Palmer, founder of the Alliance of Religion and Conservation, is a quiet genius based in Bath (and until recently Kelston). His book Sacred Land: Decoding Britain’s Extraordinary Past kicked off his Sacred Land project to help people rediscover the deeper qualities of the landscape around them.

The artist Penney Ellis and I went and asked him about the Kelston Roundhill. We started by asking him about the name itself. Here’s what he said about that (transcribed by me, E&OE):

It has two names. The most popular name – the name most people know and you“ll see on the maps – is “Kelston Roundhill”. That is is absolutely accurate. It is a very dramatically round hill; it rises above Kelston. But it’s a late Georgian or Victorian name, more concerned with describing than with evoking.

It’s original name – and the only trace of this now is the barn in the village here called Henstridge Barn – is Henstridge. Now Henstridge is a far more interesting name than Kelston Roundhill. I confess I’m somewhat biassed here.

Henstridge means “the hill of the stallion”. And – this is speculation, but I think it“s valid speculation – in Celtic mythology the horse was the most powerful symbol, both of new life and regeneration, but also of war (think for example of the white horse at Uffington on the Berkshire Downs, just below Uffington Castle). So this was a power place. It was a place you would gather the tribes together around you; your symbol.

One of the most astonishing things about Kelston Roundhill is you can stand in the centre of Bristol and it’s the only natural feature you can see, apart from Dunbury Hill. It stands out. It is remarkable. You can see it for dozens of miles away. Clearly it has always been a significant hill. 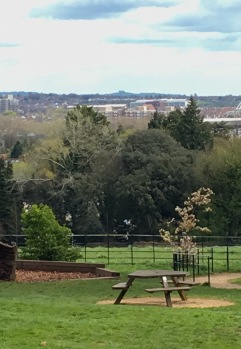 What I think “Henstridge Hill” tells us is that this was a rallying point for the tribes – certainly in the Celtic period when the horse was enormously significant. It was also to do with this notion that the horse was given complete freedom to roam, a tradition that comes from India. Remember that the names of our oldest features here we share with Sanscrit – Sanscrit names of rivers and hills abound in Britain. So we share one tradition which went into India in one direction and came across to Europe in the other.

In the Indian Vedic tradition the horse is the symbol of the freedom of the tribe. One of the traditions was that when there was a dispute you would bring a horse to a high point and the horse would be let free. And where the horse went, the tribe had the right to go. But it also becomes this standard you would raise when you were under threat. And so my sense is that Henstridge hill was the rallying point for the tribes and the clans that lived around here, certainly in the Celtic period.

3 Responses to What’s in a name? Martin Palmer says why he prefers “Henstridge”.