A year of fantastic Clump photos celebrated in picnic prizegiving

Posted on August 23, 2014 by kelstonroundhill

Winners of the Clump photo competition were celebrated on 16 August at a picnic held in two Army tents.

Overall winner, for a whole season’s series of epic pictures (among many favourites we chose the clump under a highly significant May full moon) had to be Matt Prosser. Matt wins a Bath Soft Cheese, presented by Hugh Padfield, and a jar of Kelston Roundhill honey prepared by Dr Clive Smith. Another award of single-estate Rodden Apple Juice from Dorset went to Graham Padfield for his picture of the barn in the setting sun. Finally BonnieMarie (from whom we think there is more to come) gets an award of a bottle of cider (contributed by Matt) for her rainbow on the clump (is it beaming energy up? or down?).

Many thanks to all who came, judges – especially Paul Clarke for his insightful comments – contributors of photos and of prizes.  Main aim was to ensure that no-one went home with the prize they’d brought in the first place – successfully achieved we think. 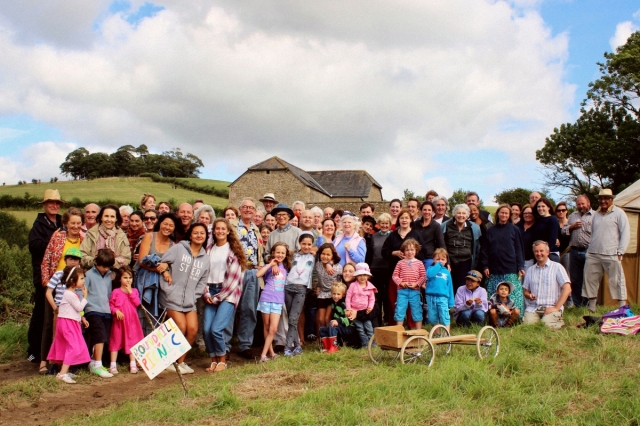 For next year’s August picnic we plan an “any media” competition for expressing the spirit of the place. Also – inspired by Theo – soapbox races. Ideal occasion for that with a long, steep bumpy track and at least half a dozen qualified doctors and nurses in attendance.